Can kids handle the truth about meat?

What with celebrating over 25 years of helping the planet one creative project at a time, we decided to revisit our favourite animal welfare campaigns.

We’ll gloss over the fact that we’re probably the only Vegan creative agency in London: today we’re in a reflective kind of mood.

Let’s go back, way back…

Three things you probably didn’t know about UP

We have created brands, campaigns and campaign videos for a massive range of charities, including: Save The Children, Christian Aid, The Vegan Society, World Animal Protection, RSPB, Friends of the Earth, Greenpeace, Compassion in World Farming, The Vegetarian Society, The Humane Society, Four Paws and Cruelty Free International.

Let’s look at the best of our animal welfare campaigns from each decade.

First stop the 1990s, when grunge and faux fur was all the rage and Cruelty Free International (then BUAV) wanted to refresh their image to appeal to a younger audience and raise more funds through their merchandise range.

We then designed and produced an extensive range of merchandise included clothing, mugs, badges, key fobs and pens.

While it’s hard to pin any one outcome on a long term advocacy campaign, we like to think the banning of cosmetics testing in Europe was one of the most significant wins for BUAV.

It’s hard to imagine now how the idea of animals having ‘rights’ was such an underground concept.

Along with generating much needed income to help achieve a change in this attitude, we also like to think the campaign helped raise the bar a little on the expectations people had for an animal rights campaign, which were often crude and aggressive.

The noughties kicked in and it was time for us to shape an important global campaign working towards an end to the long distant transport of live animals.

Working with Derek Humphries, we launched the WSPA-led (now WAP) Handle with Care campaign in 2008 by commissioning a double decker bus with each window showing animals crammed inside.  It was then driven across London, landing up in Trafalgar Square.

Inside the bus were undercover videos of animal enduring horrific journeys, the sounds of the distressed animals could be heard from outside. It was a powerful approach, putting people in place of the animals, asking them to feel the experience and make a connection.

The campaign highlighted four of the worst routes: sheep from Australia and New Zealand to the Middle East, cattle from Brazil to Lebanon, horses from Spain to Italy and Pigs from Canada to Hawaii.

The stunt made the front cover of the Independent

As a result of the campaign’s legal petition to the Hawaii Department of Agriculture, the misleading “Island Produced Pork” label was removed from Hawaii retailers’ products. The label misleadingly implied that live animals transported from Canada and mainland U.S. to be slaughtered in Hawaii were born and raised on the islands.

The coalition swiftly mobilised national and international support for animals when news broke of a possible resumption in sheep exports from New Zealand to Saudi Arabia. The result: resumption is now off the table, saving at least 50,000 sheep a year from a horrific three-week long journey.

Fast forward to our current decade, and alongside DTV we took on the StopTheMachine global campaign for Compassion in World Farming, highlighting the link between factory farming and wildlife loss.

We created the name and a strong identity and iconic graphics showing elephants, jaguars and penguins being sucked out of their natural environment into the ‘machine’.

To launch the campaign, we designed and built a bespoke exhibition stand – a vast red box which opens to reveal the horror inside.

The stand also incorporates a strong photo op – a life-size leaping paper jaguar – which was hugely successful at the Natural History Museum launch.

The exhibition continues to tour, taking its bold message across the UK and Europe throughout 2018-19.

And here we are, with Gillian Egan, at the launch.

As so to the present day. And we are asked to design and produce the most ambitious campaign The Vegan Society have ever launched. The TV ad is airing throughout November on Sky on Demand and All4, and has so far reached 1 million viewers, and counting. Here’s the 60sec ad:

READ MORE about the Future Normal

Of course there’s still plenty to campaign for, so keep the UP team on speed dial for compelling Campaigns, Campaign Brands and Campaign Videos. It really can change everything.

Most children instinctively care about animals, and would literally lose their lunch if they knew what happened to them before they were turned into sausages, bacon, etc. Parents, in an effort […]

Most children instinctively care about animals, and would literally lose their lunch if they knew what happened to them before they were turned into sausages, bacon, etc. Parents, in an effort to shield their children from these horrors, often hide what really happens to animals on farms and in slaughterhouses.

This raises the question: if the truth about meat production is too gruesome to share with children, how can we make them complicit in it?

In our video for PETA, launched last week, we filmed kids asking them if they know where meat comes from. Their answers – among them “poo”, “ham is a vegetable”, and a spirited chicken dance – make it clear they don’t know the truth about whom they’re eating. But if they did, how would they feel?

Make sure to watch to the very end!

The video achieved 300,000 views in the first week on PETA UK and US facebook pages alone, as well as a lot of heated discussion. Which is exactly what PETA wanted!

“Our compassion should not just be for the cute and cuddly. We know so much more than previous generations about the way fish experience pain and distress, and we have […]

“Our compassion should not just be for the cute and cuddly. We know so much more than previous generations about the way fish experience pain and distress, and we have a responsibility to treat them decently and humanely.” John Flack, MEP

This sentiment encapsulates our exhibition for Compassion in World Farming’s #RethinkFish at the European Parliament last month. Because while most people understand that fish feel pain, there is still a sad lack of empathy for these creatures.

So, the exhibition stand seeks to challenge what we thought we knew about fish, and why it’s time to rethink how we treat them. As you walk around the stand, you first learn about the extraordinary parallels between us and fish, including some amazing stories, and then how they are farmed. Currently fish are the only farmed animal not covered by European Farm Animal Welfare protection.

The opening event was a great success, 9 MEPs spoke and another 20 officially supported the #RethinkFish initiative. 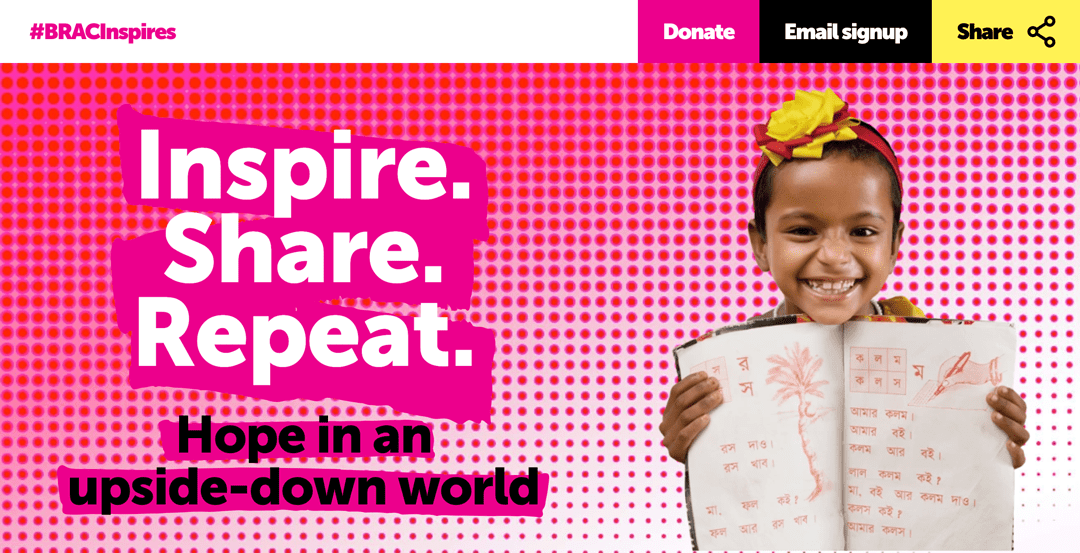 How can you learn when you can’t go to school? How do you stop your friend’s marriage? What colour is hope? The world has never been here before. But some […]

How can you learn when you can’t go to school? How do you stop your friend’s marriage? What colour is hope?

The world has never been here before. But some people have.

BRAC International supports people living in poverty to realise their potential using proven and innovative solutions. In this time of coronavirus, maybe we can learn from them.

UP were asked to create an online campaign – BRAC Inspires – to tell some of their amazing stories of survival. Hard-won wisdom to share in hard times.

We created a campaign identity, microsite and social media content to share these incredible stories of resilience and inspiration.

Imagine if cars were invisible? More than half of Londoners think you can always see when pollution is bad in the capital – when in fact many pollutants are invisible […]

Imagine if cars were invisible?

More than half of Londoners think you can always see when pollution is bad in the capital – when in fact many pollutants are invisible and can be present in air that looks ‘clean’. And more than 50 per cent of London’s toxic air pollution is caused by… vehicles. [Source: london.gov.uk]

And there are plenty more scary facts: did you know London’s Oxford Street is the most polluted street on earth [Source: telegraph.co.uk].

Above is a short, fun animation we’ve produced to shine a light on the issue.

Working in London ourselves, we’re ecstatic about London’s Car Free Day this Sunday 22 September, encouraging everyone to cycle, walk, use public transport, and party!